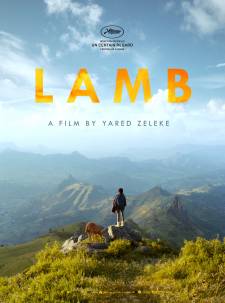 Yared Zeleke’s remarkable first feature tells the story of young Ephraim, a boy who is sent by his father to live with distant relatives in the Ethiopian countryside after his mother’s death. Ephraim uses his culinary skills to make food for the family and sell samosas at the local market, but his stern uncle considers cooking too feminine and makes Ephraim work harder in the field.  When his uncle decides that his beloved sheep Chuni (which had belonged to his mom) must be sacrificed for the next religious feast, Ephraim will do anything to save the animal and return to Addis Ababa.  Lamb is a rare film that shines beautiful and poetic through its subtle use of cultural specific details like a traditional coffee ceremony, injera bread serving, Amharic pop music playing on the radio, and flawless performances from both professional and non-professional actors.